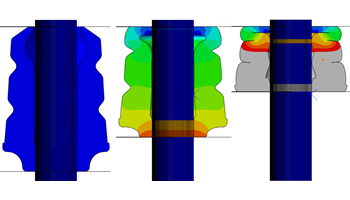 Posted at 13:25h in Uncategorized by 4RealSim

The world is nonlinear: 8 benefits of using Abaqus

When Abaqus was released in 1978, its basic element formulations were implemented using fully nonlinear equations. Still today, this core foundation enables the developers of Abaqus to create much more realistic FEA aspects to simulate virtually any form of complex real-world physics.
Other solvers, on the opposite, started with linear assumptions. As a matter of fact, due to limitations in computing power, linear FE models were the industry standard in the 70’s and 80’s. In the 90’s, as CPUs and RAM became cheaper, this led to a shift in terms of “required realism”. Today, with powerful servers, cloud computing or even laptops, nonlinear analyses are the standard, as computing power is no longer a main issue from a real user perspective.
Nevertheless, nonlinear FE models can be computationally expensive and time consuming. In this respect, the main benefit of the Abaqus code, which was originally conceived as a nonlinear solver, is that it will run any nonlinear simulation faster and will converge to more realistic results than other codes.

Apply now for the Abaqus evaluation package and evaluate the Abaqus nonlinear capabilities.

Webinar: Introduction to the Abaqus remesher

Webinar – How to start with bird impact simulations