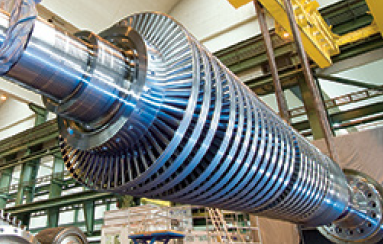 Posted at 08:53h in Uncategorized by 4RealSim

This post describes how Alstom Power uses ABAQUS to improve steam turbine efficiency. This is one of the cases that you can find in the Ebook: Finite Element Analysis for Turbomachinary. Download the ebook now to get access to all the cases.

Sometimes referred to as the perfect engine, steam turbines rapidly replaced the steam engine due to greater efficiency at converting heat into motion and motion into power. Their rotary action also became the primary power source for driving generators to create electricity.

Steam-powered turbines now generate some 80 percent of the world’s electricity and are expected to do so well into the future. But given the changing face of energy markets and economic and environmental pressures for greater efficiency and reduced CO2 emissions, steam turbine performance is being scrutinized under a design and optimization microscope.

For manufacturers and power plant operators alike, the goal is to squeeze maximum wattage out of the available energy source.

Modern steam turbines are exposed to greater stresses than earlier versions. The faster you can get a turbine up to operating conditions, the more energy you can produce. These rapid start-ups put tremendous thermal stresses on a turbine as the temperature is raised by several hundred degrees in less than an hour. In the past, power providers took their time during start-ups—a typical start-up might have taken over four hours—and as a result, stresses were much lower. Today’s power plant operators do not have this luxury, and need to shave start-up time to maximize energy production and efficiency.

Additionally, while power plants in the past ran continuously for long periods of time, modern plants and the steam turbines that drive them need to adapt to varying operating conditions: plants supplying peak power need to ramp up and down on an almost daily basis; Combined Cycle Power Plants (CCPP) have both gas and steam turbines and need to switch regularly between the two power sources; and plants that provide backup for sustainable energy sources need to come online quickly when weather conditions change.

Due to these variable operating conditions, transient events have become common. Unscheduled operations such as double-shifts or load following operation are also the norm.
“Steam turbines need to be able to start-up rapidly, react to load changes in a quick and predictable way, and tolerate the stresses inherent in these operating conditions,” said Andreas Ehrsam, Project Manager at Alstom Power in Switzerland. “These are key technological challenges for modern power plants and for our engineering team.” In the future, the challenges will only increase. According to Ehrsam, “The target for hot start-up of next-generation CCPP steam turbines is well below 30 minutes.” With 100 years of experience designing and building steam turbines, and having supplied major equipment for 25 percent of the world’s existing electric power generation plants, it’s easy to see why Alstom Power is continuously looking for ways to improve turbine performance and maximize power production.

In simplified terms, the rotor in a steam turbine is comprised of rows of rotating blades that capture the energy from high velocity steam jetted from stationary nozzles in between the rows. During transient events in the operation of a steam turbine, thermal stresses occur causing high fatigue loading—and these stresses are especially prevalent in thickwalled components. At the same time, turbines experience gradual creep loading as a result of general operation at high temperatures. Combining creep and fatigue loading over time puts stresses on the turbine, eventually leading to crack initiation and growth that can limit turbine lifespan.

Alstom Power has been optimizing steam turbine start-up processes for years. They use ABAQUS FEA because of its powerful thermo-mechanical simulation capabilities. Prior to this, early optimization analysis at Alstom Power was based on finite difference codes and simplified component models.
Moving to FEA, Alstom engineers would first derive the transient thermal boundary conditions for the whole start-up simulation, basing it on a set of predefined process parameters. In a second step, they would perform a finite element analysis to verify these thermal boundary conditions. This sequential approach required numerous iterations—a tedious manual
process—to arrive at the optimal process parameters.

With the demand for increased operational flexibility and more accurate modeling, Ehrsam’s engineering team looked to the automation capabilities in ABAQUS to bypass the time-consuming iterative simulation process. To automate the optimization, the group developed a design tool that interlinked ABAQUS with Alstom’s in-house thermodynamic code using Python, the programming language of the ABAQUS kernel scripting interface. This solution, according to Ehrsam, “allowed direct and easy communication between our proprietary code and ABAQUS/CAE.” The result was a tool that determined optimal transient thermal boundary conditions based on real time thermal stresses and automated the search for optimal process parameters through the use of a feedback control algorithm. “Use of this tool eliminated the need for the high number of manual iterations that were previously required,” added Ehrsam. “As a result, the process became much more efficient.”

To put the tool to work, Alstom Power chose to simulate a steam turbine rotor during a typical 60-minute start-up. They used ABAQUS for a number of steps: for preprocessing; for the creation and meshing of 2D models of simple parts such as axisymmetric rotor models; and for optimization automation using Python scripts. More complex 3D models were created in CATIA V5 and, depending on the application, imported into ABAQUS using the CATIA V5 Associative Interface for ABAQUS or the CATIA V5 Import feature. The team then used ABAQUS to mesh the model and perform the finite element analysis of the rotor. The time step for mass flow control and automation was set to 60 seconds. 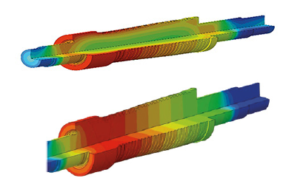 To start the simulation, Ehrsam’s group modeled the initial temperature profile of the component before start-up. First, the turbine was accelerated to nominal speed for grid synchronization. Then, throughout the 60-minute start-up, the team optimized the loading gradient so the maximum stress
in the hottest section of the rotor was kept just below the material stress limit of the rotor materials until eventually steady-state temperature profile at base load was reached. Running on a standard engineering PC, this automated optimization took approximately 16 minutes.
Although the earlier manual calculations each took only about a third of this run time, they consumed significantly more setup time because they were based on estimates that had to be changed manually from run to run.

“As a result of the automated process, we were able to determine the fastest start-up parameters and process without exceeding stress limits,” said Ehrsam. This led to a change in the design of the rotor grooves based on global deformation and heat flows. “Comparing the sequential versus automated method,” Ehrsam said, “we demonstrated time-savings and improvements in accuracy using the automated tool.” A typical time for a start-up optimization using the previous manual method was about 10 man-days. With the new tool, this was reduced to only five. The Alstom Power team validated the automated analysis against the previous process and found good agreement between results data.

The advantages of automating this process have since led Alstom Power to begin testing the use of Isight, as it would enable them to conduct an even deeper search of the turbine design space. “In the world of power generation, small changes in efficiency can save millions of dollars a year in fuel cost,” said Ehrsam. With savings on this scale, using simulation and optimization together to squeeze maximum wattage out of turbines will become increasingly important to power producers in the future.