Posted at 16:25h in Sin categorizar by 4RealSim

The optimal stiffened panel construction is shown below in a VCollab model. Click on the 3 dots in the top right and select Full Screen. Click on the arrows in the middle bottom to navigate in the report.

From the performance, operational, interface and design requirements, it is concluded that recurring cost and buckling failure modes are the main design drivers of the interstage along with the lowest possible mass. The proposed concept for the interstage is based on a stiffened shell construction with ring-frames.

The simplified stiffened panel construction (see below) consists of an aluminum cone and aluminum ring frame, connected to each other with an infinitely stiff bond. The construction has been modeled with Abaqus, and contains 6 analysis steps: a frequency study, 4 simplified static load cases with concentrated forces and moments and a buckling study. The (optimal) simulation results are shared inside the html file attached to the bottom of this post. The html file is generated with VCollab. 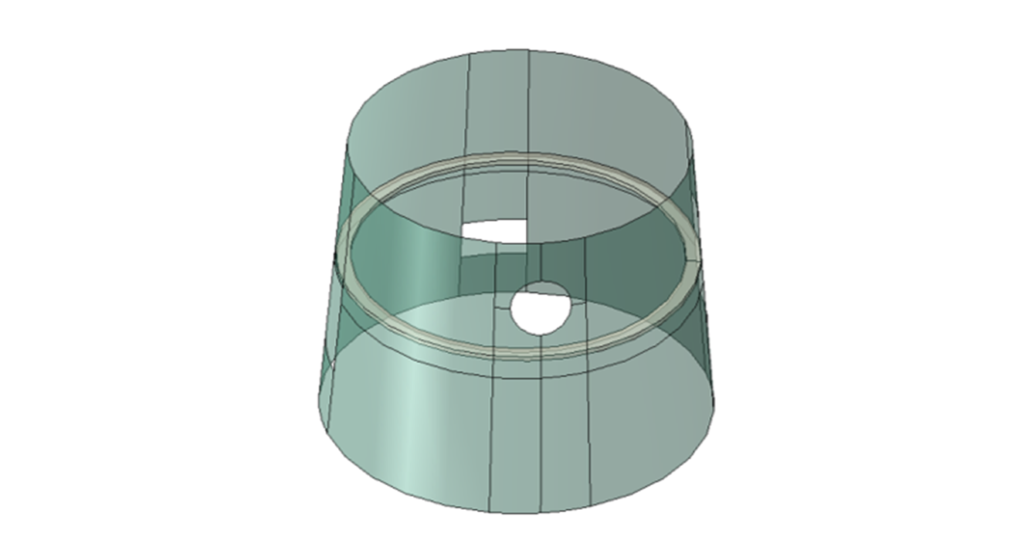 The requirements of the stiffened panel construction are the following

A possible solution to optimize this structure could be a process automation and design optimization solution, like for example Isight. The biggest advantage of this kind of solution would be that there is total freedom in the parameters and the outputs.

On the other hand, there are also some drawbacks.

The workflow has been created, and 7 parameters have been varied to identify the lightest possible configuration that satisfies all constraints:

The initial configuration of the parameters has been randomly chosen. The optimization has been performed, and a total of 250 Abaqus runs (21 hours) has been executed. The final mass was around 385.2 [kg], but could be further reduced if the optimization would continue to run.

The advantage of HyperSizer Pro is that it is developed to perform sizing optimization. There are 50 different panel concepts, like unstiffened, sandwich, stiffened (hat, T, I, angle, bonded, fastened) or isogrid included in the software package. The stiffeners can be modeled discretely or taken into account with the smeared stiffness formulation.

Also, different built-in failure analyses, like (local) buckling, crippling, strength, eigenfrequency or stiffness are directly available in the solution. Furthermore, it is possible to add custom-developed failure analyses to the platform. These failure analyses are based on analytical methods, meaning that they are calculated very fast.

On 27 February 2019, a free Webinar – Introduction to HyperSizer Pro (Stress/Optimization Tool) is given to introduce the capabilities of HyperSizer Pro.

In the first stage, the interstage is optimized with the smeared model approach. This means that the stiffeners are smeared into the shells. An Abaqus model is prepared, where shell elements are used for the to-be-optimized part. A single FEA run is executed with arbitrary initial values for the various parameters.

The Abaqus result file is imported in HyperSizer Pro, and 68 different sections are recognized as components which will be sized independently from each other. In this case a uniaxial stiffened panel with L shaped stiffeners have been chosen as panel concept. Various failure analyses have been selected to be considered for the margins of safety.

The Abaqus simulation has been included in the HyperSizer optimization loop to check the global buckling and eigenfrequency requirements. A total of 5 Abaqus simulations (20 minutes) are required to find an optimal structure of around 334 [kg].

The build-in margins of safety and the Abaqus buckling and eigenfrequency constraints are satisfied, but the stress constraints can not be checked as there are no physical geometric dimensions due to the smeared stiffness approach.

The results from the preliminary sizing have been converted into a new Abaqus model. The stiffeners are placed in the axial direction of the interstage with an average spacing of 150 [mm] and are represented by beam elements. The complete interstage has 238 different sections, for which we will optimize the different zones.

When importing the model in HyperSizer Pro, 238 skin and 238 stiffener components are recognized. For each of the skin/stiffener pair, there are 8 possible thicknesses and 1125 possible designs for the stiffeners, thus in total 9000 combinations are evaluated.

Strength, panel buckling and stiffener buckling failure analyses are executed in HyperSizer Pro, while the global buckling and eigenfrequency values are extracted from the Abaqus run.

In total 5 Abaqus iterations are required to perform the detailed sizing, taking around 1 hour and 30 minutes to complete. All margins of safety are positive, while the buckling, eigenfrequency and stress requirements are satisfied. The mass has been reduced till 323 [kg].