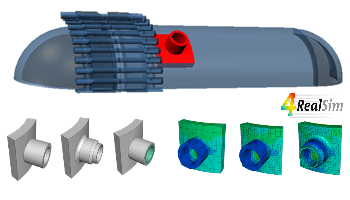 The submodeling technique in Abaqus is used to study a local part of a model with a refined mesh based on interpolation of the solution from an initial (undeformed), relatively coarse, global model.
During this online techwebinar, intended for 4RealSim software customers, the submodeling technique is introduced, the benefits are discussed and demonstrated.

Investigate a local part with a refined mesh

Node-based submodeling is the more general technique, supporting a variety of element type combinations and procedures in both Abaqus/Explicit and Abaqus/Standard.

Surface-based submodeling is provided as a complement to the node-based technique, enabling you to drive the submodel with stresses from the global model.

Who should attend this event?