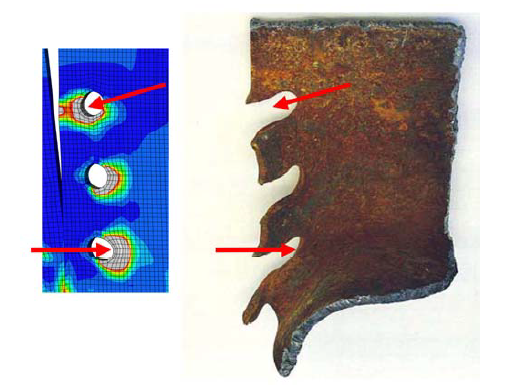 Posted at 08:51h in Uncategorized by 4RealSim

Sadly enough, accidents happen. Car crashes, collapsing buildings due to earthquakes, construction failures (e.g. World Trade Center 5 failure or the Minneapolis I-35W Bridge) and other disasters can lead to the ultimate question: how could this happen? This question is an important question to get answered, not only for the relatives of the victims, but also for the legal responsibility.

Athos 1 and the second worst oil spill in American history

Recently, a brilliant forensic investigation example has appeared on the SIMULIA community, written by Stephen King (a senior Solution Consultant at Dassault Systemes, not the famous writer).

Back in the day (2009), Stephen was providing support to a customer who was involved in investigating the damage caused to a single-skinned, Greek-owned oil tanker, the Athos 1. The ship had been in the process of docking at an oil terminal on the Delaware River, USA, when the hull was punctured by an old anchor that had been left on the river bed that unfortunately, led to the second worst oil spill in USA history at the time.

But how on earth can this have happened? In the opinion of the American petroleum company and owner of the oil terminal, the ship must have been dangerously too low in the water thereby placing the blame on shipping company. On the other hand, the shipping company and US Government disputed this saying that the terminal owner had a duty to keep the riverbed clear of obstructions to shipping. Hence a legal argument as to who was to blame ensued.

The arguments revolved around the role of the anchor, of which there was no doubt that this was the offending article. It has two possible resting positions; one with the flukes down (the large prongs that dig into the seabed) which would mean that the ship would have to be very low in the water for contact to be made, and one with the flukes up (as shown in the picture) meaning that contact with the hull was much more likely. 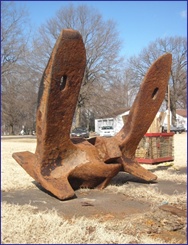 Stephen devised a simulation using Abaqus/Explicit which consisted of a mostly rigid section of the hull with a flexible section in the region of the damage. The model used shell elements to model the hull and the bulkheads with material damage initiation and damage evolution to try and replicate what had been reported after hull inspection. The approximate speed of the vessel was known at the time of impact but very little else – particularly the aspect of the anchor with regard to the riverbed and the effective compliance of the riverbed itself.

After numerous attempts experimenting with softened contact, angles of attack and initial position, a simulation was produced that resulted in the included animation. The location and extent of the tear and puncture holes were remarkably close to that witnessed. The ship makes contact with the tip of the fluke which results in a tear in the hull and a rotation of the anchor on the riverbed. This rotation then causes the palm of the anchor to puncture the hull a little way from the tear. The animation shows the general process as well as a view from inside the hull as the damage occurs. An image of the damage from the outside taken when the ship was in dry dock is included in the animation.

Was the damage to the hull really caused this way? We will never know for sure. But what we do know is that the simulation was based on a robust mechanical solution. In contrast, the ‘other side’ had commissioned an animator, who had worked for the Disney Corporation, and he had produced an animation of how the damage could have been caused by the anchor in its ‘flukes down’ position. Unfortunately, this had more in common with the physics displayed in a ‘Road Runner’ cartoon than in reality.
Anyhow, the Finite Element simulation results were sufficient to convince the lawyers and the Judge in the case that there was a reasonable possibility that the damage might have been caused by the anchor in the ‘flukes-up’ position, meaning that the shipping company was not to blame. In fact, after very lengthy proceedings, the Judge ruled that the real culprits were the people who left the anchor on the riverbed in the first place, but the identification mark on the anchor was mysteriously missing so they could not be traced. This left the US taxpayer with a clean-up bill of several hundred million dollars, but at least it led a ban on all single-skinned ships from transporting oil.

Feel free to contact sales@4realsim.com to discuss how we can help with forensic investigations.