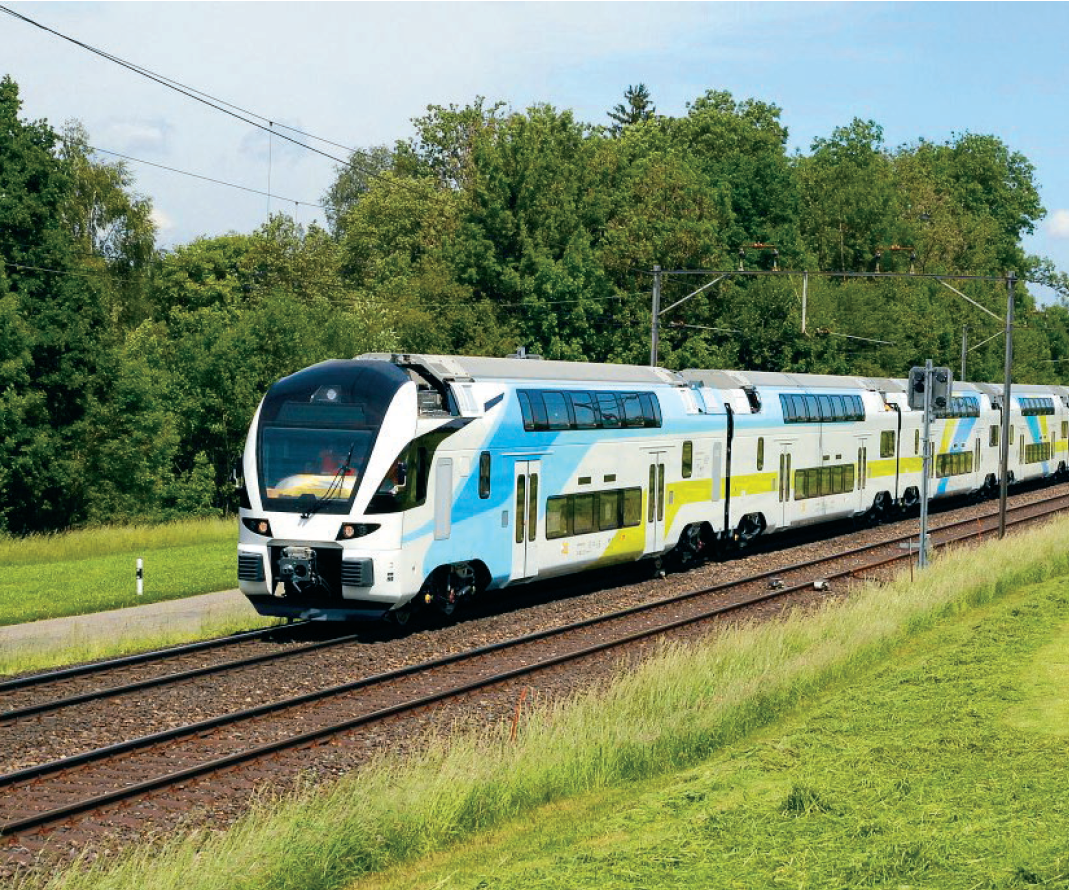 29 May Abaqus for train railcar simulations

Posted at 13:50h in Uncategorized by 4RealSim

Using Abaqus enabled Stadler Rail (a Swiss train building company) to confirm that the KISS railcar design successfully fulfilled all requirements of the European standards while optimizing weight and reducing product development times.
This post is based on the Stadler Rail customer story written by Dassault Systèmes SIMULIA.

While designing a new rail car, the engineers have a significant need for simulation in order to best address safety questions.
During a crash, will the welds hold, particularly if the train is in its later years of service? Will the passenger portion of the coach retain its shape? Also important: Will the internal components and assemblies of the passenger area remain in place and be relatively undeformed?
Stadler Rail, headquartered in Bussnang, Switzerland, has been answering these questions with the help of simulation. Stadler Rail designs and build tailor-made trains, trams, bi-level trains and double-decker commuter trains, called in short KISS. The KISS runs at speeds up to 200 km/hr.

As with all transportation designs, keeping weight light is an important goal. To ensure strength at the same time, the car body is made from 35 hollow, large-scale aluminum extrusions joined with an incredible number of MIG welds. On average, there are about 12,000 meters of welds in a railcar. As one can imagine, the weld performance is every bit as vital for safety as that of the extrusions themselves.

Crash Energy Management is an extensive part of product development for a new train design. It is guided by several different European rail safety standards, most notably “Crashworthiness requirements for railway vehicle bodies (EN 1527).” Stadler has used Abaqus for over 10 years for these sorts of simulations.

The current Finite Element train model are extremely detailed yet highly efficient models. The KISS railcar model is over 3 million elements and has 12 million degrees of freedom. A typical element length represented just 25 millimeters of the 25-meter car, affording a close-up look at load effects throughout. The aluminum extrusions, welds, milled parts, and even fasteners (over 1000 bolts and rivets) are represented. We paid special attention to defining element density and mesh quality in order to fully optimize the simulation’s capture of stress gradients. 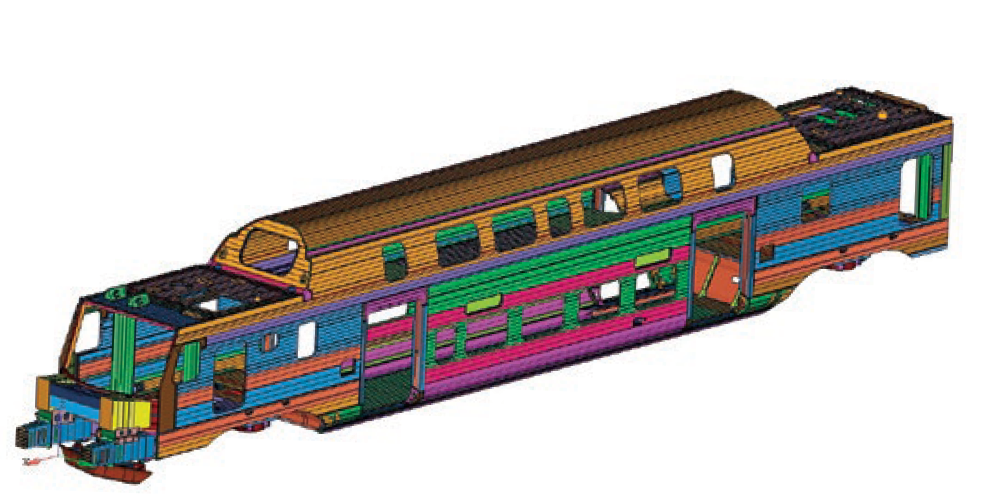 The model was used for static analyses, in Abaqus/Standard, of 45 different global load cases examining the passenger area, the car coupler, and buckling and vibration modes. An important goal was to check whether the car design would withstand the given load conditions or would deform unacceptably.
The most important case was an impact load of 1500 kN on the coupler joining the rail cars. It was specified by a safety standard (EN 12663-1) that states the railcar must sustain such an impact with minimal deformation. Running their analysis, Stadler engineers found little to no deformation in the coupler, and the other static analyses were positive as well. 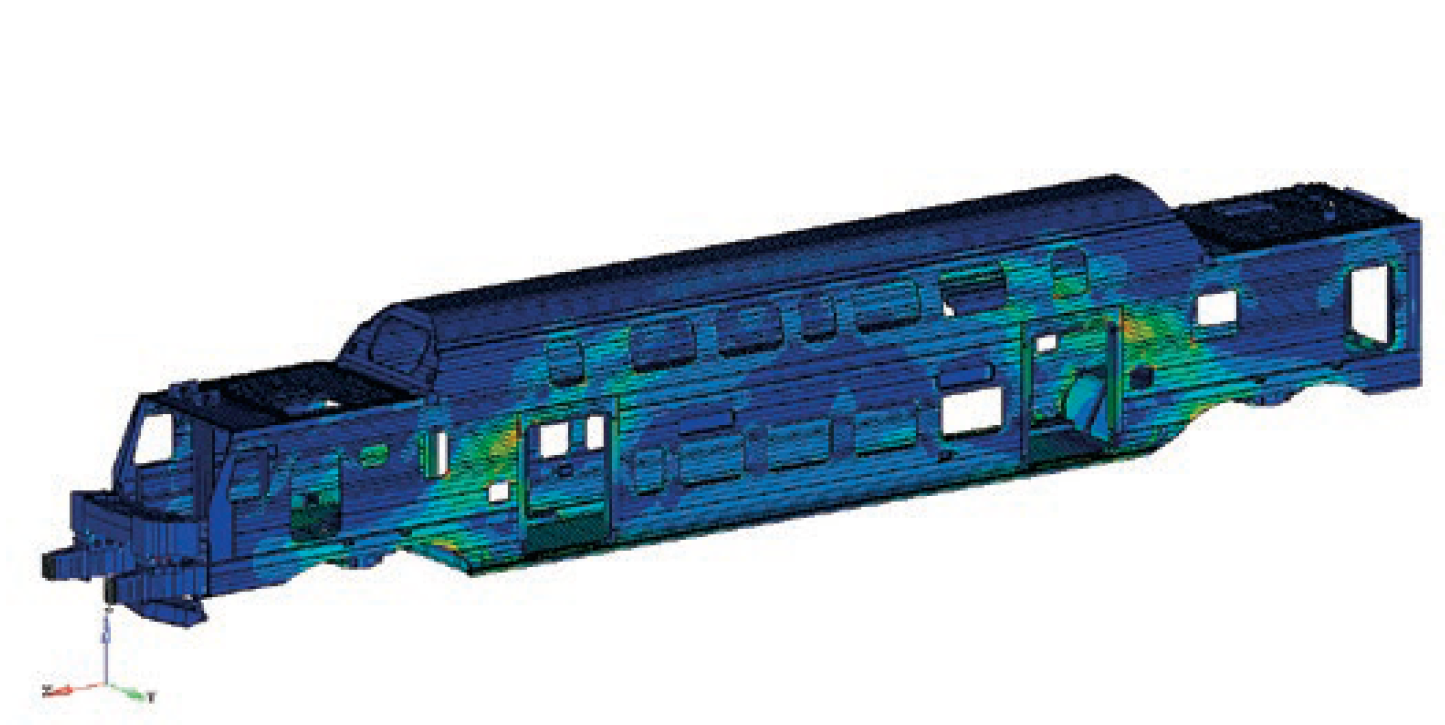 Once the static analysis was complete, engineers evaluated the Abaqus FEA results using the fatigue strength postprocessor FEMFAT. Fatigue loads for weld examination included damper forces between the car body and the bogie, traction and braking loads and acceleration loads in all major directions. Fatigue effect on the welds is quite important, since the aluminum welds have a lower fatigue strength than the base materials of the extrusions building the car body.
The notch-stress approach has been used for the fatigue evaluation. It gave insight into the life of the most critical part of the weld for all load cases. The fatigue software cycled the welds through the projected 40-year operating conditions and lifespan of the railcar, providing the load collective (total load of the car), along with specifics about notch-weld stresses.

Four standard collision scenarios require examination of impact: front-end with an identical train unit, front-end into a buffered rail vehicle, front-end into a heavy obstacle (such as a truck at a road crossing), and impact into a low obstacle on the track. Of all these the most critical is the head-on impact between identical railcars, since it could potentially cause the highest number of injuries as well as the most serious ones. The dynamic crash analyses are simulated using Abaqus/Explicit on a time line extending from the first collision contact until 0.2 seconds after the impact.
The analysis focused on the crash module at the front end of the car. This module, a tapered tube with multiple chambers, is designed to absorb energy by plastic buckling sequentially (and predictably) on impact, contributing to the rest of the car retaining its shape and protecting any occupants. The simulation involved materials characteristics and behavior under crash load as well as the deformation of the module. 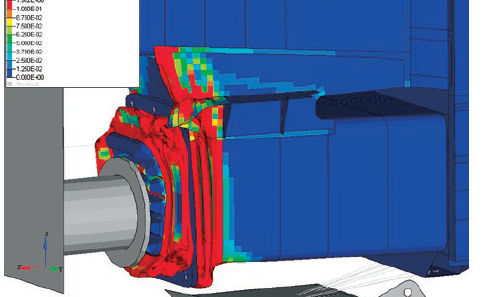 Outside of crash analysis, the engineers looked at vibration of key train components during normal operation—for example, a simulation of the constant vibration created by the rotating mass of the compressor engine. This analysis applied a dynamic force within a specific frequency spectrum and explored the effects of fatigue on features of the railcar.

Physical prototyping and testing remain an important part of railcar design. While simulation provides valuable insights into design and helps engineers meet safety standards, there are additional requirements for validation of static and dynamic analyses through physical testing. Tests include applying vertical and longitudinal loads to railcar structures and using hydraulic actuators.
During real-world testing of the KISS car, the main deformations of the full-size railcar body and components were measured and stress levels obtained at over 140 positions via strain gauges. The physical testing showed a close correlation with the FE analyses, and dynamic loading of the crash module also produced results in close agreement with the simulation. 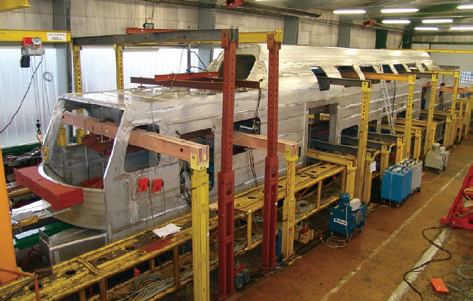 Stadler’s simulations confirmed that the KISS railcar design successfully fulfilled all requirements of the European standards.
Abaqus enabled Stadler Rail to reduce product development times for the KISS cars while retaining high quality and safety. Stadler Rail was able to quickly perform a significant number of analysis iterations, enabling them to optimize the railcar structure in terms of weight while still meeting all safety standards.