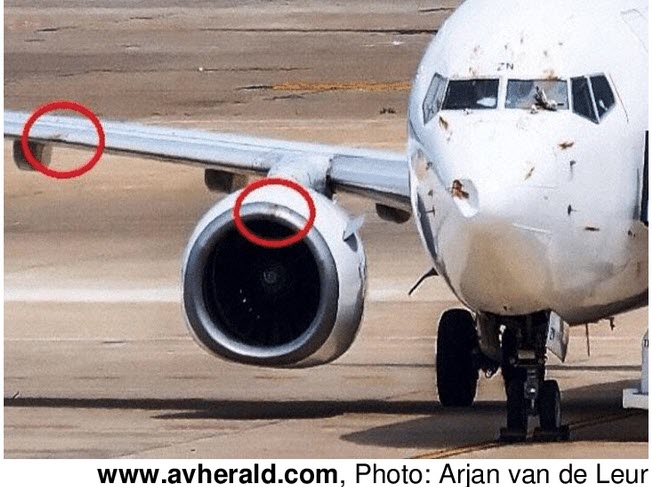 Posted at 13:28h in Uncategorized by 4RealSim

A misguided flock of birds can cripple a plane. New aircrafts are designed to increase the survivability of the different aerospace structures when colliding into birds. 4RealSim has decades of experience in bird strike simulations, both for civil and military applications. Contact our engineering services now to discuss your Finite Element problem.

Wildlife strikes: a serious threat to the aviation industry

Bird strike incidents are an increasingly common problem in the aviation industry, posing serious safety threats to normal aircraft operations. As a matter of fact, the number of strikes reported annually by the Federal Aviation Administration (FAA) increased from 1,850 in 1990 to a record high of 17,228 in 2019. Furthermore, wildlife strikes killed over 292 people globally and destroyed more than 271 aircrafts in the period from 1988 to 2019 [1].

Virtual testing: a way to reduce the cost of prototype testing

For the aforementioned reasons, experimental bird strike testing has become part of the certification process of specific aircraft component designs, and major regulatory bodies in the aviation industry require extensive testing to certify against bird strike. However, the development of test articles and physical certification tests proved to be expensive and time-consuming, especially when redesign of the prototype is needed. As a result, the trend in the industry is to rely on virtual testing, in order to reduce the amount of experimental testing and stay competitive.

Despite evident advantages when compared to experimental testing, numerical simulations can still be time consuming and costly, as bird strikes are complex physical phenomena to model. Some of the challenges when modeling a bird strike are the followings:

Given the high-dynamic nature of the event, Abaqus/Explicit solver is preferred over Implicit, due to its robustness in solving problems characterized by large displacements over small time increments.

In this blog post, we will provide insights into the physics of this event and clarify how to deal with the modeling difficulties associated with it.

Since it is difficult to model the bird as it is and provided that bird strikes are not repeatable, surrogates are typically used in bird strike experiments/simulations, which proved to be satisfactory for design and certification purposes. In a finite element framework, it is common practice to model the bird as a cylindrical body with hemispherical cuts, as illustrated in the figure below.

From a physical point of view, a bird strike event is classified as a high-velocity soft body impact. To this regard, Barber et al. shown that the bird behaves like a fluid upon impact [2]. This behavior is given by the fact that contact pressures generated during this event are several order of magnitudes higher than the strength of the impactor (bird), although lower than the strength of the impacted structure. As a result, the response of the impactor is controlled by its density rather than its strength.

Given these considerations, it is widely accepted that the complex constitutive behavior of a real bird can be approximated by an elastic-plastic hydrodynamic material model.

Through experimental testing, the bird strike event was found to be characterized by four phases [3]:

The four phases and the pressure profile generated throughout the event are illustrated in the figures below [3], [4]. 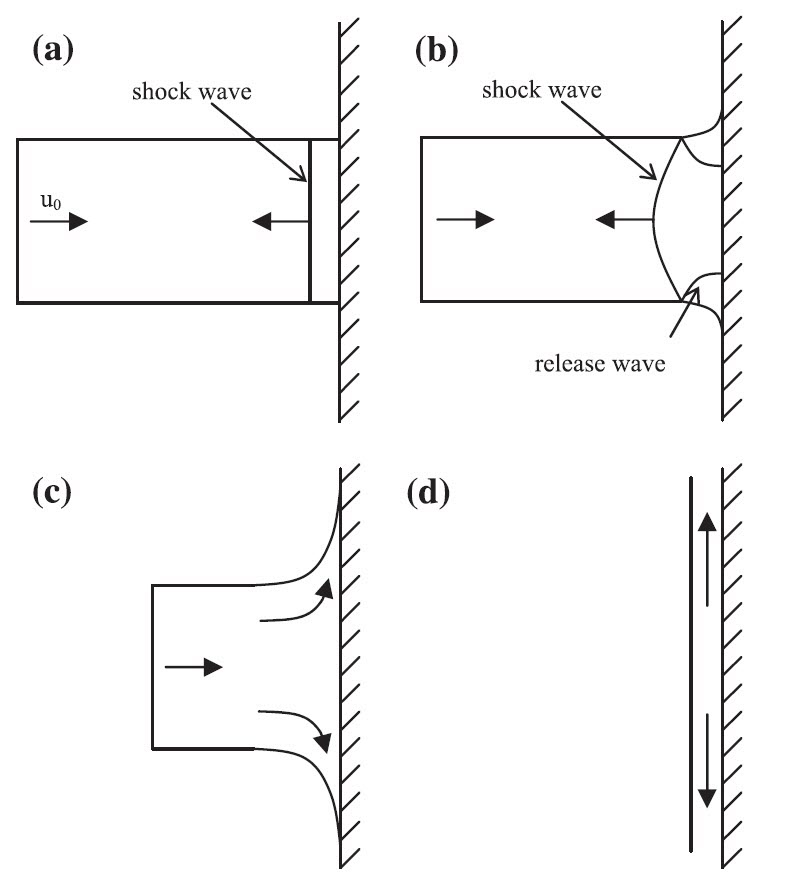 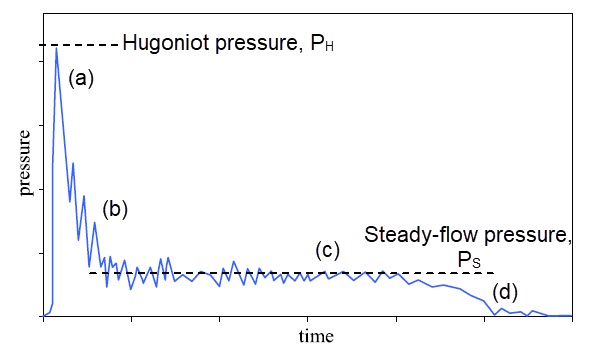 Crucial parameters which are often obtained through experimental testing are peak pressure upon impact and steady state flow pressure.

At high pressures, the pressure-volume response of the bird can be best modeled in Abaqus/Explicit using a tabulated equation of state (EoS), which provides great flexibility in describing the hydrodynamic behavior.

When using the Abaqus/Explicit solver, different formulations exist to accurately capture the strain of the bird upon impact. Three prominent formulations used in the industry for this purpose are the following:

Lagrangian formulation is the conventional finite element approach and requires generation of a mesh for the impactor. A ductile damage criterion is typically defined in combination with the element deletion mechanism to prevent excessive distortion of the Lagrangian elements. Despite deletion of failed bird Lagrangian elements, conservation of the total mass and momentum of the bird is retained with this formulation, as the nodal masses will continue to impact the structure. However, this approach comes with some limitations when it comes to handling secondary impacts and bird “spray”, which are best captured by the other two methods.

On the other hand, the SPH formulation is a mesh-free approach where the bird is represented by a discrete number of particles. Each particle is described using a smoothing function and is related to neighbouring particles through this function. This method allows dealing with large deformations avoiding the excessive distortions which are encountered with Lagrangian elements. However, it can get computationally expensive when high resolution is needed.

The CEL approach is sometimes also preferred to overcome numerical difficulties arising from extreme deformations of Lagrangian elements. Instead, a simple uniform mesh made of Eulerian elements, which is fixed in space, is generated, so that the impactor is fully contained within the boundaries of such domain throughout the whole analysis.

There is no general rule of thumb in regard to which formulation is best to select. Usually, the choice of one formulation over another one results from comparison with best practices and experimental results.

Nevertheless, the general contact algorithm available in Abaqus/Explicit is well suited to deal with such complex contact scenario. Through inclusion of the whole contact domain at the beginning of the analysis, this one will detect automatically faces and edges that come into contact and accounts for differences in material properties of contacting bodies through the penalty method.

The plate edges were constrained in all DOFs and the impactor was initially positioned at the center of the plate, at a small distance. An initial velocity was prescribed to the impactor as a predefined field variable. The impact event was modeled through a dynamic explicit step with a time period t=0.001 s. The constructed parts and the model assembly are shown in the figure below.

Impactor at the left, impacted plate at the center and model assembly with boundary conditions at the right

The event was modeled using all the three previously mentioned approaches in order to offer a comparison, i.e. with Lagrangian (LAG), Smoothed Particle Hydrodynamics (SPH) and Coupled Eulerian Lagrangian (CEL) formulations. The setup at the beginning of the analysis is shown in the figure below. When using the CEL approach, it was required to define an additional part (the yellow box in the figure), which was used to define the Eulerian domain.

The deformed configuration at the end of the analysis for the three different approaches is shown in the figure below.

The peak pressure and the peak out of plane displacement on the aluminium plate were extracted throughout the analysis and are compared for the three methods in the figures below. From the peak pressure figure, it can be observed that the typical pressure profile over time was obtained, where the shock wave stage, the pressure release state and steady-state flow pressure stage can be identified. At the same time, it can be noted that the three approaches are providing very similar results, both in terms of pressure and in terms of predicted displacement, as illustrated in the peak out of plane displacement picture.

Peak pressure throughout the analysis for the three different approaches

A misguided flock of birds can cripple a plane. New aircrafts are designed to increase the survivability of the different aerospace structures when colliding into birds. 4RealSim has decades of experience in bird strike simulations, both for civil and military applications. Contact our engineering services now to discuss your Finite Element problem.